Is your vessel trading or going to be trading in EU waters?

Article 95 of The EU Biocidal Products Regulation (528/2012) came into force on 1st September 2015. Corrpro Companies Europe Limited are an Authorised Active Substance Supplier for this equipment. Ensure your compliance. Please contact us for further details.

Marine fouling and biofouling commonly occur in seawater circulation systems. This involves the establishment of marine organisms and bacterial growths. The fouling organisms enter the system in microscopic and macroscopic form (eg. larvae) and spats settle and develop into adult forms wherever environmental conditions exist. 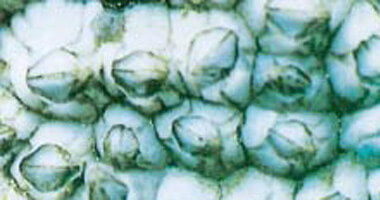 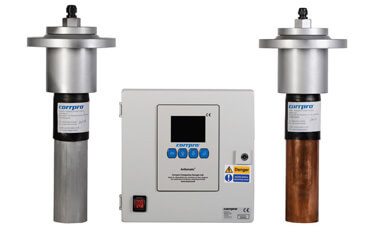 The Anfomatic® system applies direct current to copper anode(s) releasing a controlled quantity of copper ions into the system to create an environment in which primary forms of marine life do not grow. Current applied to the aluminium anode releases a ‘floc’, a precipitate of aluminium hydroxide.

The aluminium oxidation products reduce corrosion rates on ferrous components in the seawater system by modifying the ferrous oxides and by film deposition. Similarly, iron anodes are utilized for cupro-nikel pipework.

The Anfomatic® system requires minimal maintenance and is environmentally friendly. Mussels are not killed by the systems: the environment it creates prevents them settling or developing. A further benefit on the Anfomatic® system is that potable water distillation of plants can be operated without interruption.

Each microscopic controlled module supplies two anodes. The current flowing to each anode is indicated by digital display. This allows visual monitoring of all the separate anode currents. The unit also incorporates the following features as standard:

The antifouling anode is a rod of our Cuproline alloy used in conjunction with an anti-corrosion anode.

Depending on the location of the anti-corrosion anode in seawater circulation system and the metal it is protecting, the material will be one of two alloys: Aloline® or Ferroline®.

The worldwide nature of Corrpro’s operation means that Anfomatic antifouling systems can be designed and fitted to vessels wherever in the world dry docking is available. Whilst installation is a straight forward procedure, Corrpro staff are always on hand to provide specialized advice and to assist with commissioning. In addition Corrpro can supply replacement anodes and spares for most types of antifouling systems and box coolers. 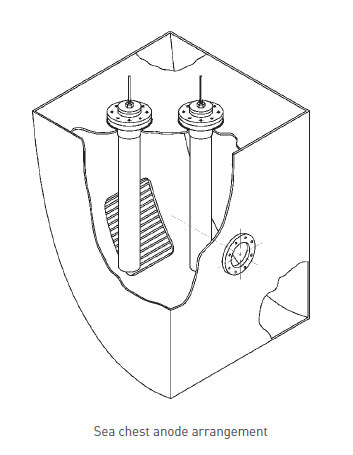